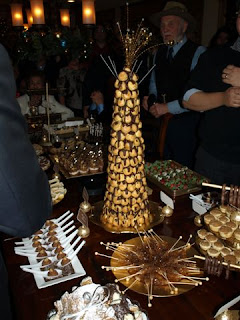 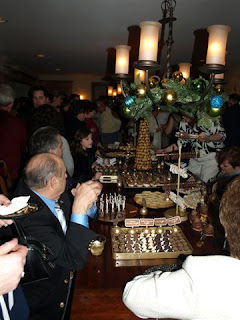 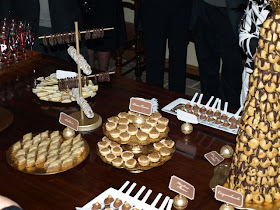 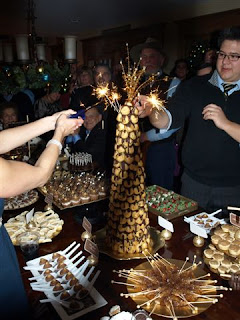 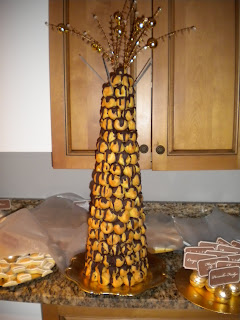 Ok, I know this is sooooo last month, but I still wanted to share.

I was asked to put a dessert table together for a holiday party for 300 guests. I made a little over 1,000 bite-sized "yummies" in 5 days! My kitchen/oven was doing overtime that week. The table itself was 16' long and full of treats. Getting any decent pictures (more on this later) was very difficult since we put the table together while the party was going on. The client wanted to make the set-up an event in and of itself. The "parade of the desserts" started at 10:30. The dessert table was only a small element of the over all party.

There were several showcase events during the party. There was a Rat Pack group that performed. They did a great job! It was Sammy Davis, Jr., Frank Sinatra and Dean Martin. As you can see from the picture, they really did look like them. They stayed in character all night even when mingling during their breaks and it was hilarious. 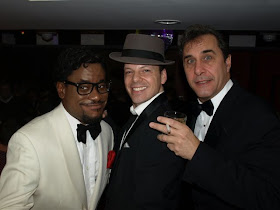 The food at this party, oh the food... let's just say it could have been my last meal and I would have been content. Amazing!!!! There were several food stations all over the house. The outdoor kitchen was in production mode all night long. The head chef cooked for demonstration in the main kitchen. The dining room table had a whole roasted pig (you know, like Hawaii luau kind) among other delicious things. There were also 2 pizza chefs in the pizza kitchen - yes, a pizza kitchen. The client installed a real Italian brick oven in his house for this exact reason. And just a side note, the pizza kitchen is about the size of my only kitchen!!! These weren't your everyday pizzas either. Any and every topping was available. If you wanted say, a brie and shrimp pizza... coming right up! There was a raw bar in the sunroom that literally was from floor to ceiling. You can see in the pictures that the final floral arrangement we put on the table hit the ceiling. The seafood salad in the champagne glasses that you can see in the pictures were to die for! The star fruit garnish on the rim was so appropriate for the celebratory new year. 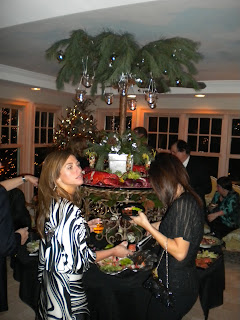 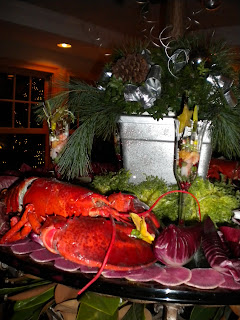 Anyway, I digressed. Back to the dessert table - My department. Since this was actually a post holiday party (Jan. 2), I chose a chocolate and gold color scheme to stay away from anything red, green, new year's, etc. And chocolate - Hello! I didn't hear anyone complaining anyway. The client had asked me to incorporate fire or sparklers to give a show. All I could think of was burning down the house and all he could think of was more "show". I just love him! Anyway, we carried all the desserts through the 300 people. Not an easy job. We arranged them as best we could around the guests who were about to stampede at any moment. The client gave a speech, lit the croquembouche and then it was time to eat. Move out of the way!!!!

So, back to the lack of pictures. Getting through the crowd was challenging enough to set-up, let alone taking pictures of the final table. I had been elbowed one too many times so I headed out of the mob. So only in an effort to share (by no means for good photography), I have included some pictures of the desserts themselves when they were down in the prep kitchen before the party. Nothing glamorous, but you get the idea. Since I didn't get very good pics or even a picture of everything I made, I just thought I'd list everything...
-Croquembouche (2 feet tall)
-a berry medley in champagne glasses
-5 different kinds of truffles (250 in total - my hands were tired of rolling)
-Baklava
-Ferrero Roche cupcakes (a saw this here on TomKat Studio)
-Hazelnut Mousse Spoons
-champagne glass decorated sugar cookies
-chocolate covered strawberries and pretzels
-pecan tassies
-chocolate champagne mousse with edible gold dust (cool, huh!?)
-peanut butter cheesecake pops -these were a HUGE hit. The inspiration for the tags from the always amazing Amy Atlas here. One side said "Happy New Year" as you can see in the photos and the other side said "2010"
-2 different kinds of fudge. 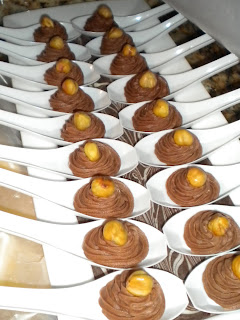 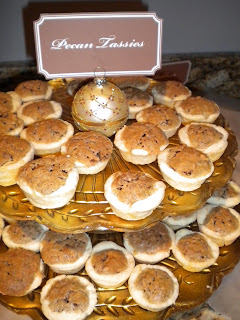 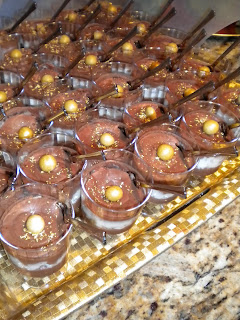 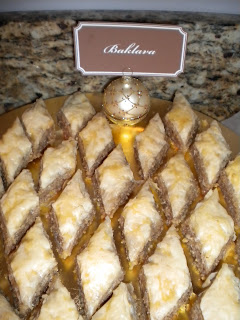 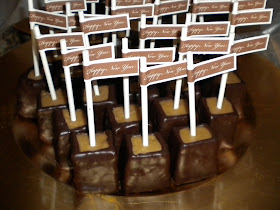 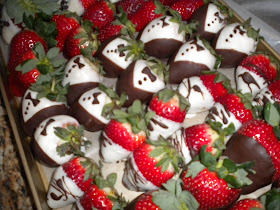 Oh and did you see the pretzel towers up there in picture #3? My hubby made those for me. I thought they were really cute. I had seen something similar online, but for the life of me I can't find it again! I wanted to share it with you guys. Oh well, yet another lesson for me to document, document, document!
My hubby also had the idea to pour chocolate into the plates holding the mousse spoons. It really helped break up all the white. He's so smart like that! I poured melted milk chocolate in first and spread it all around. Next, I spooned in white chocolate and used a toothpick to swirl it in all over. You have to take care not to over swirl or it will just turn to the milk chocolate color.
a. party style