A couple of weeks ago, I filled a cake order for a woman who bought a gift certificate I donated to a cancer benefit for a little girl who is still in a fight for her life.  (Prayers welcomed and needed!)  The purchaser decided to use her certificate for her husband's birthday.  As you can probably guess from the finished product, he is an avid New York Rangers fan.  I had the logo printed on sugar paper and placed it front and center on top.  Along the sides, I made plaques with numbers of well-known players and a hockey cake wouldn't be complete without a few sticks and pucks about. 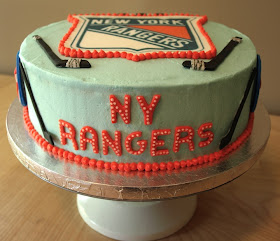 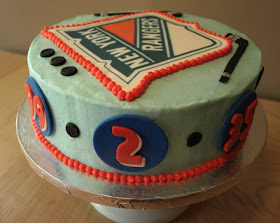 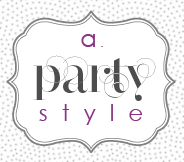 www.apartystyle.com
Welcome to the new look of A. Party Style!  I am thrilled with the new design and I hope you like it too.  Beyond the look, there are a few other things I'd like to point out.  There are now pages at the top (some still "in the works").  I also switched domains in the process, so new web address as well as a new email. I'm a dot com now - I feel so grown up! :)

I didn't do this alone - trust me!  I could not have done it without the talent (and patience) of Carolyn.  She was fabulous to work with!  If you are in the market to tweak your blog or do a complete overhaul, Carolyn is your gal.  You will not be disappointed.  Check out her work here. (While you're there, check out her cool stories about living in Austria.) 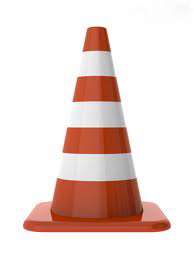 Please excuse the mess for the next couple of days.... a new site design and a domain switch are in the works.  (I'm so giddy with excitement!) So, if something looks off and/or weird, that's why.  Bear with me while we work out all the kinks.
a. party style No comments:

Well, the summer season is now officially upon us.  Here's to drinking lemonade, lounging on the deck, watching baseball games and visiting the beach. 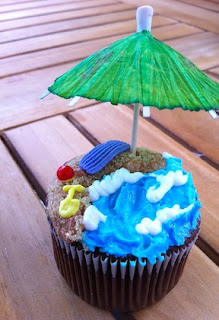 Speaking of beach, tomorrow I'm doing a little cake decorating with my daughter's kindergarten class.  This should be interesting! :)  They are each going to be making a simple little beach scene atop their own cupcake.  I made a mock-up for the kids to look at and sharing it seemed appropriate on this summer solstice day.
a. party style No comments:

Wishing all the wonderful dads a
Happy Father's Day! 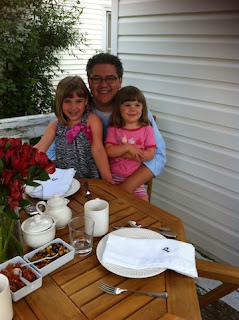 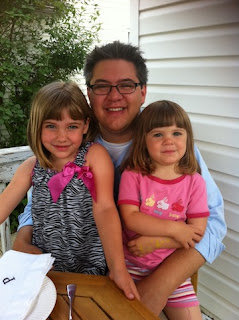 Along with some friends, my family and I had a little breakfast on the back porch.  A small celebration of gratitude to my husband - the best dad a wife could ask for!  And, of course, I have to thank my own father on this day.  I wish I could have made him breakfast too, but unfortunately the miles between us make that impossible.  In his honor, I listened to Jimmy Buffett's Little Miss Magic - our song.  Not only did I listen to that song countless times with my father throughout my childhood, but it was the song my dad and I danced to at my wedding.
I love you both!
a. party style No comments: 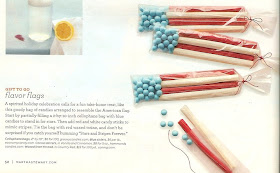 {image scanned from Martha Stewart Living July 2011}
Did you see these adorable favor bags in the latest issue of Martha Stewart Living?  Fantastic right!?  These would be perfect for any 4th of July celebration!  I searched for a better photo online (it's not even on marthastewart.com yet!?), but came up empty handed so I just scanned the magazine.  For the ease of your eyes, I have re-typed the how-to/instructions below.

Gift To Go - Flavor Flags
A spirited holiday celebration calls for a fun take-home treat, like this goody bag of candies arranged to resemble the American flag.  Start by partially filling a 2-by-10 cellophane bag with blue candies to stand in for stars.  Then add red and white candy sticks to mimic stripes.  Tie the bag with red waxed twine, and don't be surprised if you catch yourself humming "Stars and Stripes Forever".
Cellophane bags, 2" by 10", $6 for 100, groovycandies.com. Blue sixlets, $6 per lb., economycandy.com. Cocoa stirrers, in Vanilla and Cinnamon, $8 for 5 oz., hammondscandies.com. Waxed linen thread, in Country Red, $13 for 100 yd., caning.com.
a. party style No comments:

The end of the school year is fast approaching. (Well, for those of us on the east coast anyway.  We are still paying for the awful winter we had. Snow days are fun until you have to make them all up! Our particular district doesn't get out until June 27th - ouch!) So, with the end of the year comes teacher gifts. For my daughter's kindergarten teacher, the class parents are collectively pulling money to buy her a gift card.  She will get to pick out something for herself, but we also wanted to give her something that captured the students she impacted this year. 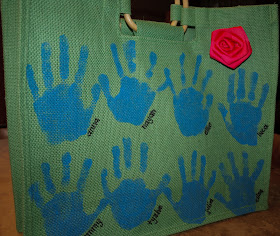 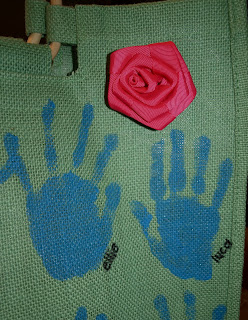 I bought a burlap tote at Joann's (on sale even!) and fabric paint.  I went into the classroom (secretly on a day the teacher was absent) and helped the children stamp their hand prints onto the tote.  The tote was the perfect size - the front and back was just enough space for the 17 students in her class.  After the paint was completely dry, I wrote their names below each of their hand prints.  (I made sure to take note of who's hand was who's while stamping.)

I hope she gets good use out of the bag - holding her lunch, transporting papers or simply carrying a good book and sunscreen to the beach this summer.  I also hope it reminds her of a group of students that love her dearly and are forever impacted by her gift of teaching.

Thank you for a wonderful year, Mrs. Ferguson!
a. party style No comments:

This past weekend, we hosted a little going away party for some of our neighbors who are returning to Boston.  (We will miss you, Larco family!)  For the menu, I decided to go with a Mexican theme - fajitas and margaritas.  Yummy!  The food was good, but the company was great!  Now as you can imagine, no one leaves my house without dessert.  We made homemade vanilla ice cream (which is one of my all-time favorites), but I gave it a little Mexican flair to fit with the theme.  I garnished each dish with a cinnamon-sugar tortilla and cayenne pepper caramel sauce.  Have I peaked your interest yet?  If yes, recipes below! 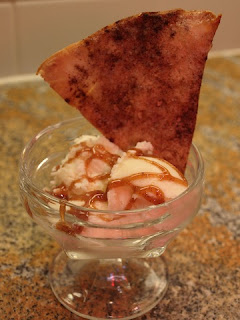 You might remember a tuscan dessert table I did awhile back.  I recently received some photos from the photographers of that event and wanted to share them with you.  As I expected, these photos are far better than any of my pictures. 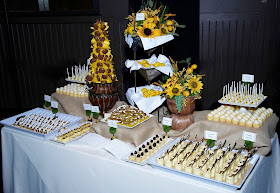 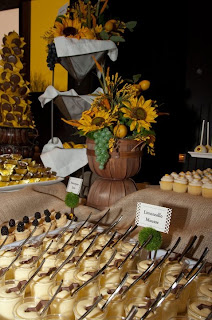 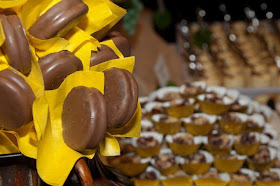 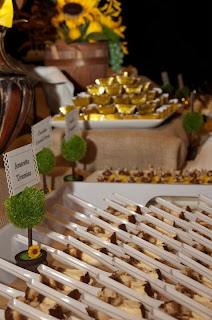 For those Pinterest addicts like myself, you have probably already seen this fantastic cake.  I still wanted to post it for a couple of reasons though.  One, for those who are not on Pinterest and secondly, because what comes after dark clouds?  A rainbow, of course!  When I sat down at the computer, this cake was the first imagine that caught my eye today.  Since I've been grasping at straws lately to have things turn around for the better, I took this as a sign that brighter days are ahead. 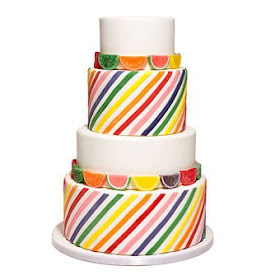 (image source)
Isn't this cake gorgeous!?  Brings a smile to my face.  I love when simple designs prove to be superior.  Here's to better, brighter days...
a. party style No comments: 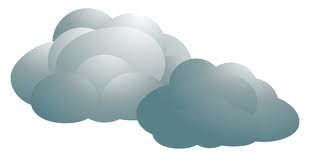 I've been a very bad blogger  - so sorry!  In my defense, it's been a rough few weeks around here; my grandfathers passing was only the beginning.  A dark cloud of sorts.  Lots of hard, sad stuff happening lately that has taken up any of my free time.  I continued to fill orders, work on projects and teach classes, but unfortunately, there has been no time left for blogging.  But, seeing as this a party blog, no need to talk about all that - lets talk about fun stuff!  I just wanted to check-in and say things are starting to turn around and I'll be back soon.  I have lots to share...  As soon as I finish up some more orders and a cake for this weekend, I'll be full swing again.  Thanks for understanding.

On a happier note, I do have some exciting news to share that will benefit all of you.  I am currently working with a talented designer on a blog redesign.  I am so thrilled and hope you like it too.  Coming soon...
a. party style 1 comment:
‹
›
Home
View web version