Hi all! I have neglected my little blog space for awhile. So much going on... We enjoyed a wonderful vacation on Cape Cod and then another week in California. I've decided I want to be a professional vacationer! During vacation, I had one of my all time dreams come true. (Details to come!!!!) Now that we are back, we are prepping for 'Mean Irene'. I've never been in a hurricane and apparently this one is headed right for us. So, I wanted to check in before she made landfall in case we are without power afterwards. I hope and pray everyone up and down the east coast stays safe! See you on the other side...

a. party style No comments:

In case you haven't heard, today is National S'more Day! A timeless summer treat that evokes childhood memories in all of us.  Well, today I found a little twist on the campground dessert that is worthy of adult memories. 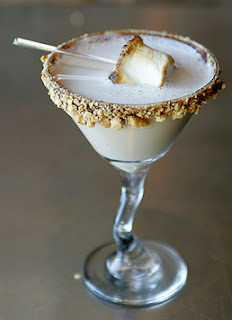 (image and recipe via examiner.com)

Pour vodka and chocolate liqueur into a 64 ounce pitcher and stir.  Refrigerate for several hours until very cold. Crush graham crackers and place into a small bowl. Rim 16 martini glasses with marshmallow creme. Dip glasses into graham cracker crumbs and shake gently to remove excess. Place marshmallows on skewers and toast over an open flame (grill or fire pit preferably). Pour 3 ounces of cold drink mixture into each prepared glass and garnish with toasted marshmallow.

Doesn't this sound good!? I'll take one and then s'more! (Sorry, I couldn't resist.)

As I mentioned in the previous post, two of our dearest friends recently got married. I, along with my incredibly helpful hubby, created the dessert table for the event. The venue was a great space in Brooklyn, NY called The Green Building. In turn, green became the color of the wedding. It was perfect - modern, clean, and so them! 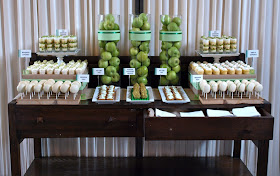 Now, trying to make a green dessert table was a bit of a challenge. I obviously wanted to incorporate the color, but in a natural form. Most green foods fall in the veggie category (not all that helpful when trying to create sweet treats.) So, I used green fruits, pistachios and little garnishes to capture the color, while keeping the rest of the foods a neutral white/cream. 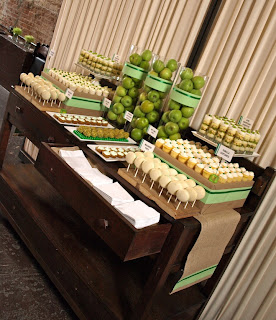 We also incorporated color with paper and ribbon details on the runner, boxes and vases. The name tags and their holders contributed more green to the table. Funny story... the tag holders were a serendipitous find in the Michael's dollar bin. During the design process, we wanted the green little cubes, but decided against them due to their high cost through the MoMA store (the only place we could find them). I'm sure I scared a few customers when I cheered out loud upon seeing them at Michael's for $1! And it was only a few weeks before the event. Oh, the little things that make a planner happy... 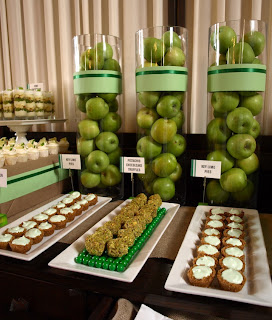 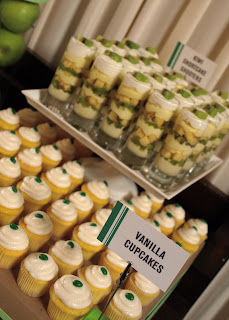 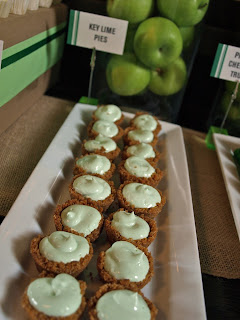 Due to the logistics of the day, I wasn't able to have the photographer shoot my table. So Jeromy and I set it up briefly, earlier in the day, so I could take a couple shots myself. With that said, there is one detail missing - the spoons for the kiwi shortcake shooters. I didn't put them in for the "mock-up" because I was afraid they would sink down too far and not look their best at the event. For the final presentation, the spoons were in. Seems silly to call attention to this, but I have had a few people ask "how did people eat the kiwi shooters?", so I wanted to make sure and clarify. 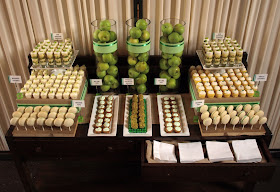 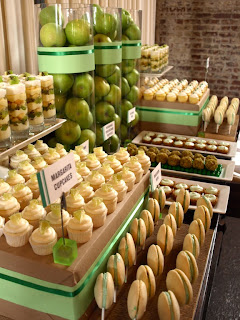 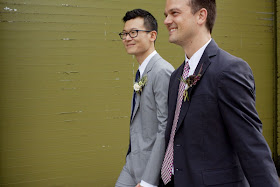 A couple of weekends ago, some of our best friends got married.  It was a beautiful wedding!!!  So much so, that today it was featured here on Brooklyn Bride.  Congrats Max and Jejon!

PS - I soon as I get my act together, I'll show you the dessert table I did for them.